Well, it’s been a few months now since quitting London (again!) and arriving to start a new chapter in Sydney, Australia. Back in February, shivering through a dreary UK winter, I’d made the decision to return to sunnier climes, and happily “fate” provided just the opportunity I’d been looking for – a job offer from Amnesty International in Sydney, producing content for their digital team. 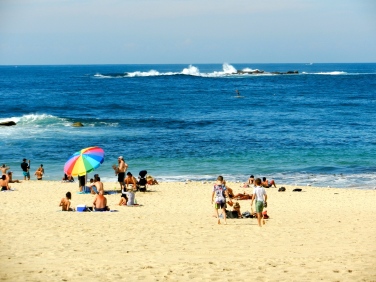 I should be used to international relocations by now (!), but the past few months have yet again been a kerfuffle of finding somewhere to live, starting a new job, making friends, and finding new places to hang out. Luckily, Australia is a very easy place to live (I lived in Melbourne for four years) and here in Sydney it all seems pleasingly familiar. Best of all, I’m beach-side, having found a beautiful recently-renovated studio apartment in Coogee, two minutes walk to the ocean and a gorgeous yellow-sand suburban beach.

I’m loving my work at Amnesty International. In just a few short months, I’ve already produced films and other digital content about all kinds of human rights themes – Global Ambassador Alicia Keys talking about her work with Amnesty, a series of films on child labour in the palm oil industry in Indonesia, a film with the Sydney Swans AFL footy team, and interviews with some amazing Indigenous rights campaigners right here in Australia. I’ve been setting up an in-house production unit, buying camera kit and all sorts of toys so we can film different kinds of projects as they arise. Very exciting!

Now I’m getting settled, thoughts are of course turning to buying a bike – yes, my next two-wheeled adventure isn’t far away, folks…. – and the maps are out once again to plan another Australasian jaunt. I’m longing to experience Aussie’s wide open roads once again and I’ve got my eye on the perfect bike to do it…

Right now, though, I’m enjoying a typical winter Sunday afternoon down at Coogee Beach – 20 degrees Celsius, glorious sunshine, and people out in force, enjoying beachside delights (in my case, that means a ginormous Italian-style gelato!). Yup, glad to be back in Oz. Very glad indeed. 🙂

Well its been another busy and exciting time at this year’s Adventure Travel Film Festival in Victoria’s beautiful Alpine region. Despite the threat of bush fires, which have been ravaging the land barely 25km down the road, here in Bright our only worries have been keeping hydrated and sun-creamed up in the searing heat!

Our festival organiser Rupert did us proud this year with a superb line-up of speakers. TIm Cope and Jon Muir returned for a second year to jam-pack the big (sweaty!) marquee with those eager to hear more of their incredible exploits. Tim’s stories of his time living with locals in Mongolia were truly mesmerising, and Jon’s tales of walking solo across the Aussie Outback and wanting to push himself to the limits of endurance had me marvelling all over again at the sheer balls of the guy!

Lisa and Simon enjoying a cold beer in the Brewery

2RideTheWorld Brit motorcyclists Lisa and Simon Thomas were probably my favourite speakers this year, giving a really entertaining insight into life on the road as a motorcycling couple. They’re both really down to earth, no pretensions, and their “anyone-can-do-it” story really did endear them to the crowds, I think. It was great poring over their bike, wondering where each little dent and mud-splatter might have happened… Still can’t believe they’ve ridden over 400,000kms through 77 countries. Brilliant stuff.

I also loved hearing Kate Leeming talk about her epic cycle across Africa from West to East through the Congo – a tale of true daring if ever there was one. And Melbourne-born Eric Phillips is proof that you really don’t have to come from a freezing cold country to be a polar explorer extraordinaire – his talk was also fascinating.

Kate Leeming and Eric Phillips outside the marquee

And the adventure travel films really were top-notch this year again – too many to list, but my personal favourites were the golden oldie 1933 epic solo motorcycle adventure Twice Upon A Caravan and Congo kayaking epic Mazungu (both shown as starlight screenings out in the balmy open air, wonderful).

Austin and Lois welcome punters at the registration tent

As ever, the festival was hosted by the affable Lois Pryce and Austin Vince who once again lent their special brand of informality and good humour to stamp this event with its unique trademark. They’ve curated all this year’s films and have a genuine and excitable enthusiasm about each and every one, which is truly infectious, I can tell you.

And that’s the key to the success of the Adventure Travel Film Festival, I think. This year, I was the Aussie festival’s chief “spruiker” (Lois will love me for using that word!), drumming up press and publicity for an event which last year had me so excited as an attendee, as I mingled with like-minded adventurous types, sharing stories of the road and planning new ones over lashings of cold beer. I’ve really enjoyed being involved this time round and I’m already thinking hard about how I can wangle it so I can attend the UK one in August! 🙂