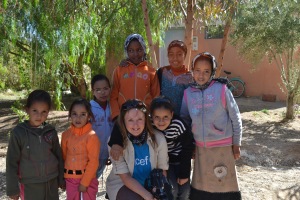 Jeanie’s a keen supporter of international children’s charity UNICEF and whenever possible uses her travels and adventures to raise money for this fantastic organisation.

She was UNICEF UK’s Television Manager for nearly two years, working on projects with Ambassadors including Ewan McGregor, Tom Hiddleston and David Beckham, as well as TV documentaries for Channel 4 and the BBC.

Here she is with some of the amazing kids at a UNICEF school project near Ouarzazate in Morocco. Jeanie filmed here as part of a UNICEF fundraising adventure trek across the Sahara Desert back in November 2010.

(below) And here she is with the rest of the trekking group, including Long Way Down producer and UNICEF Honorary Fellow Russ Malkin (top left) at the finish line. 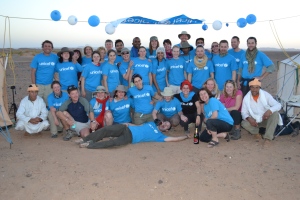 The footage and interviews Jeanie shot during the expedition were also cut into a promotional video for UNICEF.